Understanding how sophisticated buyers value a private company is critical to building a more valuable business. Valuing a medium-size company is a complex process. The standard method used by investment bankers is to apply three different approaches to determine the company’s enterprise value, which is usually expressed as a range of multiples of EBITDA. EBITDA stands for Earnings Before Interest, Taxes, Depreciation, and Amortization and is a standard way of measuring a company’s cash flow. For instance, a company with $4 million in EBITDA and a range of multiples of 4.5X – 5.5X has a valuation range (i.e., enterprise value) of $18,000,000 to $22,000,000. Each approach’s range of value is then superimposed on the others and the overlapping areas indicate the likely value of the company.

For the majority of private companies, of the three approaches described above, the Discounted Cash Flow analysis is clearly the preferred method. All too often, Comparable Companies analysis suffers from comparing apples to oranges, while Precedent Transactions analysis struggles with a paucity of data since only a small number of deals disclose the purchase prices paid for the companies.

Financial and strategic buyers are picky and highly selective. Since only 0.2% (0.002) of private companies in the U.S. successfully execute Private Capital Market transactions each year, it is definitely a “buyers” market.  A U.S. Chamber of Commerce study provides additional evidence to the selectivity of the Private Capital Markets by noting that Merger & Acquisition (M&A) advisors disqualified 65% to 75% of prospective sellers.

In the world of small business, there are three common approaches to business valuation.

These three approaches have similarities to the approaches described above for medium-size companies, but there are notable differences. A key metric in small business transactions is Seller Discretionary Earnings. SDE is a broadly accepted approach to “recasting” a small business’s earnings to adjust for owner-operator expenses. To complicate matters, SDE is different from EBITDA, which is different from Adjusted EBITDA, which is different from “earnings” reported on tax returns. The key takeaway is that there is a well established approach for valuing and selling small businesses that has been refined over several decades. The other key takeaway is that the approach to valuing and selling medium-size businesses is notably and substantially different and more complex.

Drawing The Line Between Small and Medium-Size Businesses

Size does matter when it comes to valuation. There is not a universal set of criteria that precisely defines a “small” business. For example, the U.S. Government defines a small business as companies with 500 employees. In many respects, a company with 500 employees is a large company.

Investment bankers, who specialize working with medium-size companies in the “Lower Middle Market,” and business brokers, who specialize working with smaller-size companies making up the “Main Street” market segment, prefer using the value of a company to determine if the company falls on the Main Street side of the ledger or resides in the Lower Middle Market. Knowing the correct market segment a company belongs in is important because it is central to selecting the proper transaction intermediary. Business brokers take a different approach to selling a company than investment bankers, whose process is more involved, time consuming, complex, and expensive. There is not an iron clad rule separating Main Street from the Lower Middle Market. Companies with a valuation below $2 million are clearly in Main Street territory, while companies with a valuation above $10 million are clearly in the Lower Middle Market. In between $2 million and $10 million, however, some companies may be better suited using a business broker while other companies may be better served using an investment banker as the transaction intermediary. The growth profile of a company is the key determinant; a company with a strong growth profile in an attractive industry is a more likely candidate for an investment banker. A transaction intermediary, however, is not a requirement. In many circumstances a transaction intermediary is not needed, while in other situations they can add terrific value.

An added layer of complexity exists because there are several terms used to denote a company’s “value.”

So, which of these values are best used for determining if a company qualifies to be in the Lower Middle Market? The “intrinsic value” is the proper value to use. However, the process of determining a company’s intrinsic value is complex and time consuming. Consequently, people look for quicker and easier ways to estimate a company’s value, but the results can be misleading.

Complicating matters is that multiple multiples exist. The three most common multiples are (1) EBITDA, (2) revenue, and (3) SDE. The Seller Discretionary Earnings multiple is only used by business brokers and applies to smaller “Main Street” companies. EBITDA is the most prevalent multiple used in the Lower Middle Market.

Multiples are used as shorthand providing a quick and convenient way to quote a company’s value without citing the actual dollar amount. For example, a “5X” multiple of EBITDA is the same as saying the company is valued at $20 million, provided you know the EBITDA for the company is $4 million. Since buyers often price a company based on multiples of EBITDA (typically using the last twelve months) it is natural to associate the value of the company with the multiple. At the end of the day, however, it is the absolute dollar amount that counts (and gets wired); multiples provide an easy to use method to calculate that dollar amount.

Multiples make it easy to compare one company to another in the same industry. So if a business owner knows the average range of multiples in the company’s industry is 5X – 7X, he or she can estimate what the company is worth. But this approach to determining a specific company’s valuation can be very misleading. It is important to keep in mind that averages are composed of many companies, some of which are valued 25% higher than the average and others 25% lower than the average. Where a particular company falls relative to an “average” is due in large part to the fundamentals of the company and its ability to generate future cash flows. (There are many other factors that have a significant bearing on a company’s ultimate market value … see Exit Timing and Core Equity Value.)

The Difference Between Intrinsic Value and Market Value

There are two parts to determining the market value of a medium-size privately-held company. Part #1 is forecasting a company’s future cash flows and then applying some math to adjust for “time and risk” (also known as determining the present value). The challenge is that there are many factors that impact a company’s ability to produce future cash flows starting with the industry the company is in, the company’s inherent capabilities and its position in the industry, its ability to carve out a competitive advantage, interplay between suppliers, customers, and competitors, and the overall economic environment (i.e., recessions). A company needs to look beyond past trends and focus on what specifically the company will do to produce cash flows in the future. The ability to document, explain, and defend how cash flows will be generated in future years in a credible and authentic manner is the very core of establishing a company’s intrinsic value. But not all future cash flows are the same. Cash flows that are more predictable and growing are more valuable than cash flows that are not predictable and fluctuate a lot. This is one of the key reasons that using multiples as the basis for valuing a company is inferior to using a company’s intrinsic value — what matters are the future cash flows of a specific company and not what the “average” multiple for an industry might be. Business owners who can document how they are actually going to generate future cash flows are in a much stronger position than a business owner who simply relies on “industry average multiples” and past trends. Furthermore, a business owner who can explain and defend the intrinsic value of the company is able to quickly assess if a proposed purchase price is reasonable or not. This is where the second part figures into the equation.

Part #2 is knowing there is not just “one” price that determines what a private company is worth. Instead, multiple prices exist for the same company with each price, in part, depending on the “eyes of the beholder” of each prospective buyer. Some buyers may see how combining the company with the prospective buyer’s other products, services, assets, customers, suppliers, and capabilities can produce “synergies” leading them to place a higher valuation on the company compared to other prospective buyers. On the other hand, if there are blemishes in the company, or if there is greater perceived risk and uncertainty, then a prospective buyer will apply “discounts,” which lowers the company’s valuation. A major part of building a more valuable company is knowing what specifically leads to commanding a strategic premium and how to limit risk discounts. Market value is ultimately determined by what a buyer is willing to pay … and you can influence the buyer.

Why Price And Value Are Not The Same 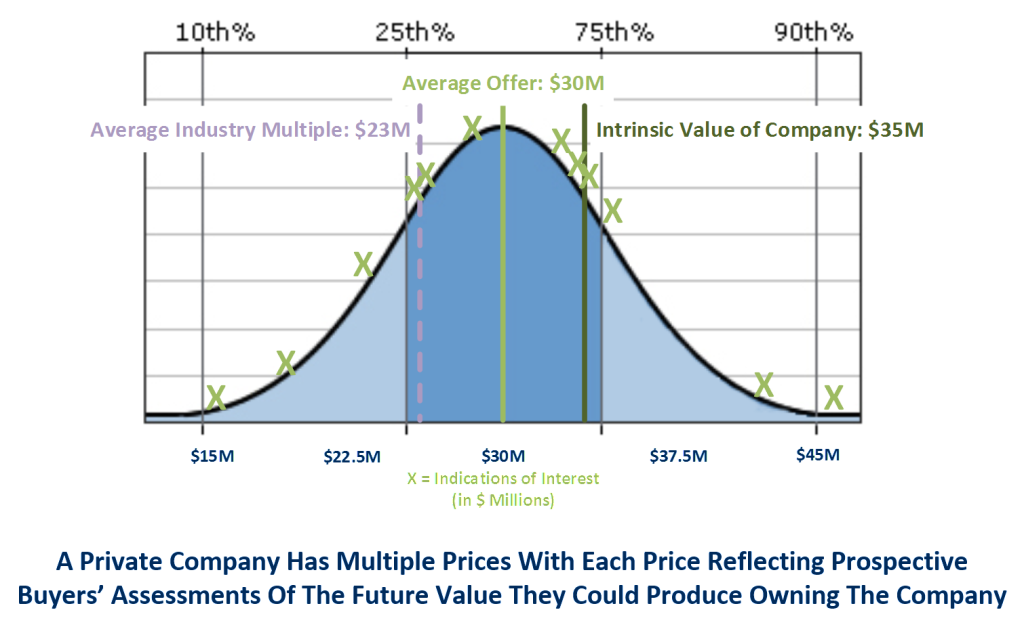 While it may seem counter intuitive, the “price” (market value) of a company is usually different from the “value” (intrinsic value) of a company. Finding the “best” buyer requires considering a broad variety of factors. What a buyer is willing to pay – and how the payment is structured – is obviously important. Knowing how a particular offer compares to the intrinsic value of a company is central to assessing how favorable or unfavorable an offer truly is. The price of a company can be driven higher, and sometimes substantially higher, by creating a competitive deal environment where two or more qualified buyers are bidding for the company (see ExitHigh Plan). Additionally, the timing of a transaction has a significant effect on the “price” of the company (see Exit Timing). At the end of the day, the market determines the price of a company and not the business owner. The business owner, however, influences higher prices by demonstrating how the company’s core equity value increases value that matters to each prospective buyer. Ideally, the business owner is rewarded with multiple prices exceeding the intrinsic value of the company.

Sophisticated buyers (see Private Capital Markets) construct detailed models to estimate future cash flows and to derive the intrinsic value of a company. This intrinsic value may then be adjusted upward to reflect a strategic premium or adjusted downward to discount for areas of risk and uncertainty. The resulting intrinsic value is then used to determine a rate of return on the investment the buyer is making in purchasing (or investing in) the company. Sophisticated buyers will also cross-check the intrinsic value with relevant precedent transactions of companies of a similar size and in the same industry that were sold in the past three years for which they have detail knowledge of the purchase price and deal structure. While the resulting intrinsic value may be quoted as a multiple, at the end of the process a specific dollar price is negotiated and paid. It is ultimately this purchase price that matters (and how it is structured) and not the multiple per se.

From a valuation perspective, a company with a strong revenue growth trajectory and no current earnings may be valued considerably higher than an established company making profits, but with flat or declining growth. Because valuation is not straightforward and depends on a lot of interacting factors, valuing companies can be confusing, complex, and counter intuitive. Business owners that avoid valuation shortcuts and take the time to understand how medium-size companies are valued – and what specifically drives value that matters in their company for their particular industry – take a big step forward to building a more valuable company.